Hello everyone. When last we updated you all we had fantastic news, that being that we’ve managed to secure a non-insignificant amount of additional funding for Norse Noir: Loki’s Exile. Unfortunately, while this is great news it comes with a few downsides, which I’m here today to talk about and discuss.

No one wants to be the bearer of bad news, least of all myself, and while I could sit here and wrap said news in a thousand blankets of obscurity I personally think it’s better to just be up-front and come out with it rather than trying to distract everyone with a wall of text.

We are sorry to announce that we will be delaying the launch of Norse Noir: Loki’s Exile until, at a maximum, April of 2015. It is our hope to have the title completed and launched prior to this date, but we are saying April now as it is our “worst” projection and would not want to disappoint our fans with any further announcements of delays in the future.

…. ok. So that’s the big news, and it sucks. The reasons for this delay are several-fold, and again, I would rather be up-front with everyone regarding the whys and hows than leave questions unanswered, so please allow me to explain.

#1: Voice Acting: As noted in our previous post regarding the additional funding we’ve received, we now have the finances (limited though they may be) to offer a fully voice-acted game in both English and Norwegian on launch. We are contractually obligated, by our arrangement with the Norwegian Film Institute, to provide a full Norwegian translation of the title, and will be extending this to our voice acting.

#2: The Script: I’m the one in charge of the writing for Loki’s Exile and I am willing to admit that it is not where I have wanted it to be. Though the plan was to have the written script finished and ready for launch by November we’ve taken the time to go through and work on both the story and the puzzle sequences in the game, putting us in a much better position story-wise but requiring a lot of rework on the game’s text. This has thankfully had very little impact on the art resources needed for the game, but does still require work. The script *must* be completed and locked in the very near future, as we will need to ensure enough time to work on translations of the game and to have our actors able to record all the needed lines.

#3: Translations: It has always been our hope to provide Loki’s Exile in as many languages as possible, and with the additonal funding for the title we now have that opportunity. Though translation work for multiple languages can itself take place simultaniously, implementing each of these languages takes individual time per translation received. This is a minor time concern, but one we wanted to list out as well. It is worth nothing here that any additional translations beyond English and Norwegian will NOT be receiving their own voice tracks (things get expensive with voice acting really, really quickly and on a lot of levels), but will instead be text-only.

#4: Character Animations: This is the big one!  As mentioned during the Kickstarter we were fortunate enough to bring aboard a new artist and animator (Marie), who has accomplished fantastic animation work so far.  (We also thank Freya for all her excellent concepts, but having stayed with us twice as long as originally intended she really had to get back to her other ventures.)

Because of this, we took a look at some of our storytelling and found places that could be better told with more characters / animations rather than cut scenes, and this restructured plan placed us just about on track to finish the game at our original estimated goal of “November-ish”.  However, knowing that we now have additional funding to help us make Loki’s Exile the best title we can, we have taken another second (that makes it the third) look at how we use animations to tell the story, and we are even more happy with what we will be getting this time.  Also, we have tried out some variations in animation workflow and this means we can bring you an updated look to the characters.  Of course, this is a lot of words to talk about the things that I know you want to see, so without further ado… meet our new Lars:

You’ll notice a small but appreciable difference from our earlier character sprite for Lars and the newer version - Our colors are a bit flatter but also brighter and more distinct overall, which is a trend we’ll be carrying forward into the rest of our sprite creation. We’re also happy to show off two other examples, in the form of our Police Station setting and the interior of Aegir’s Hall: 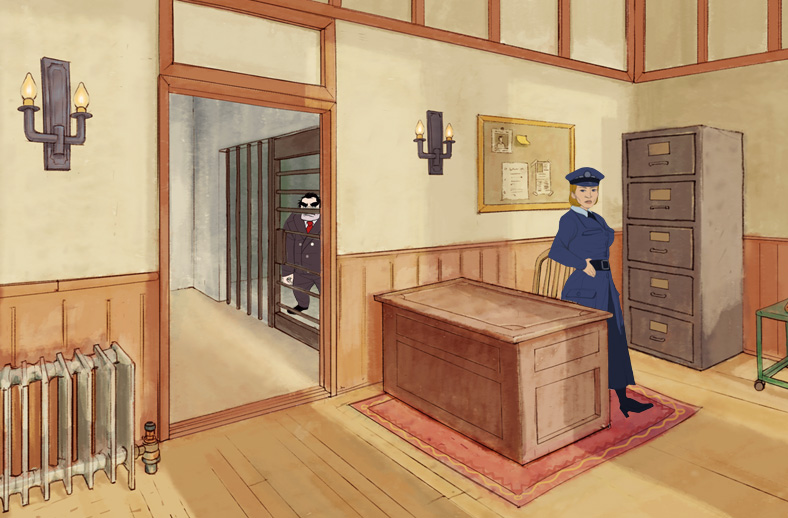 Again, notice the brighter and more eye-catching colors to the characters, as well as the slightly more exaggerated proportions & facial expressions - This helps us bring distinction to the characters and help separate them from the background action, often important with the color-muted urban environments of the city.

So. There you have it. The unfortunate news of delaying, along with the reasons as to why. Hopefully, though, you all like the progress and new direction of our art style, and are looking forward to the final product as much as we are looking forward to showing it off. Though it may be a few months later than expected, we will do everything we can to make sure it’s worth the wait.

In the mean time, please leave any comments or questions you have for the team and we’ll answer them as quickly as possible. We’re very happy to communicate with our fans and players, and look forward to your thoughts on both the good news and the bad. Until next time.